The following Resolutions were passed at the Vestry meeting held on Tuesday, November 20, 2018, regarding the 2018 St. John’s Award: 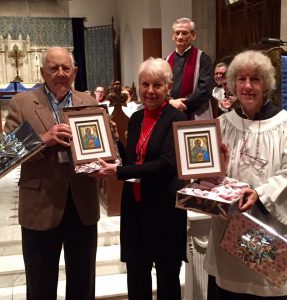 Whereas Rosemary Coverly and Kent Strickler led St. John’s parish in a successful capital campaign, raising one million dollars for the addition of our new atrium and renovations to make our facilities more accessible to those with special needs;

Whereas Rosemary and Kent have again agreed to facilitate a second capital campaign, with a goal of retiring our debt.  And working with our interim Rector, Fr. Glenn Miller, have achieved a substantial step towards our goal even before the “official” start of the campaign;

Whereas Rosemary and Kent have given years of dedicated service to the parish Finance Committee as well as Kent’s service on the Vestry;

The Vestry of St. John’s parish resolves to express the appreciation of the parish to Rosemary and Kent by presenting them with the 2018 St. John’s Award.

Whereas Deborah Carter has served St. John’s parish on both capital campaigns as well as serving on the parish Stewardship Committee giving countless hours of organizational and communication tasks;

Whereas Deborah has served on the Ministries Council and collaborated with other parishioners in their efforts of ministry with the ECW, Church School, J2A and other youth ministry;

Whereas Deborah Carter has given countless hours in service to St. John’s parish through her efforts in the area of electronics and computer work;

And, in her spare time, Deborah has ministered to her brothers and sisters at worship by singing in the chancel choir and as a member of the handbell choir;

The Vestry of St. John’s parish resolves to express the appreciation of the parish to Deborah by presenting her with the 2018 St. John’s Award.