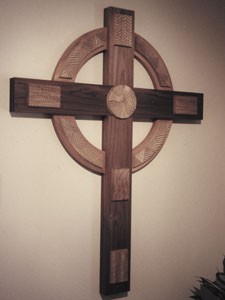 Whereas each year, the Vestry resolves to commemorate our patron saint’s day by honoring a member of our parish who best exemplifies the love for others and right action that was St. John’s trademark, there are individuals who, in John’s words, “do enough.” Present at the Transfiguration, John learned from Jesus himself how to take a clear vision down from the mountain and translate it into action in the practical world. This year’s recipient is Drew Dorgan.

Whereas Drew Dorgan is a captain in the 21st century world of marketing and communications, Drew is deeply familiar with what it takes to inspire action in a modern economy that spins around communication. As president of her company, her hectic and over-scheduled world has not prevented her from giving the best of her skill to her church. Drew knows what is needed to inspire loyalty and commitment in a complex world.

Fortunately for St. John’s, Drew is also an Episcopalian, a committed member of an ancient faith tradition that finds its focus in events that occurred two millennia ago. She is familiar with our natural tendency to allow our traditional views to cause us to move slowly and ponderously toward using the tools of the modern world to the benefit of our mission. Even so, St. John’s exemplifies for her a willingness to be open-minded and to know that there may be many roads to the same destination. She has treasure that openness as the perfect place to raise a family.

Whereas over the past three years, Drew has brought her expertise to bear on a new perspective of the nature of stewardship that has grown our level of participation every single year. Through personal study and research, she has learned and brought to this parish an understanding of what each of us has to give. Drew has reshaped the idea of stewardship from that of simple fundraising to a yearlong expression of where we are in our walk with God. She has drawn us together as a parish to recognize that stewardship is taking the gifts that God has given us and doing what we need to do as Christians. For Drew, any meaningful honor would be our own growth in understanding that stewardship is about living faith practice.

Whereas Drew has also generously devoted hours to planning our presence in the greater world of the communications media, we know there is great potential for growth, evangelism, and outreach through our web page and other vehicles of communication so familiar to everyone. Over the past several years, she has provided guidance in the more effective telling of our story through the media. As a businesswoman and marketing specialist, Drew works toward helping this parish’s many parts and organizations and the people who care about them. Connection and engagement of all of us to one another enriches the church. Drew has characterized herself as a stitcher of a patchwork quilt in telling the story of who we are as a parish.

Whereas Drew has committed herself to the teens of St. John’s through the Rite 13 and Journey to Adulthood program. Through teaching of what she describes as a “wonderful” curriculum, Drew acknowledges having learned far more from those young people than they ever learned from her. She has described how much further along as Christians they are than adults today. Drew has experienced from them an atmosphere of no boundaries, no cultural barriers, and no hesitation to get out and do what is needed to help. She has shared with them in a level of tolerance and energy for justice that will change the worked. We honor the teacher whose students allow her to know them this well.

Therefore be it Resolved that for all her efforts in helping us to re-envision ourselves as a parish committed to walking in closer relation to God, we honor Drew Dorgan for her trailblazing, generosity and creative imagination.